World Heritage in the Netherlands The dry island of Schokland is on the World Heritage List

'Schokland, world heritage' is written on the big sign along the highway. Curious because of the curious name Schokland , we decide to take the exit on the highway A6 near Nagele in the Noordoostpolder. After ten kilometers, a village suddenly rises above the flat polder.
Schokland used to be a residential mound surrounded by the Zuiderzee (today's IJsselmeer), but now the island is surrounded by grassland and undulating wheat fields. The Rietveld Schroder house is the first house that Rietveld designed and it has immediately become one of his best known designs. Both the design and construction date from 1924. In the early 17th century, it was thought that 6 windmills would be sufficient to drain the Beemster. A wrong estimate. Ultimately, no less than 52 mills were needed to drain this 3 to 4 meter deep lake. In order to be able to drain the lake, it was divided into 6 squares of 1800 by 1800 meters each. In 1612 the Droogmakerij de Beemster was a fact. 135 km ring of fortifications around Amsterdam

135 km ring of fortifications around Amsterdam

Centuries ago, during the Eighty Years' War between Holland and Spain, the Dutch resistance began to flood entire areas. This way they could easily defend themselves against the enemy. The flooded areas were too deep to walk, but too shallow to pass. The same idea has been used in the 135 km ring of fortifications around Amsterdam. The Windmills of Kinderdijk in South Holland

The fight against water in South Holland

In addition to the canals of Amsterdam and the bulb fields, the 19 windmills of Kinderdijk are a mandatory stop for any tourist who has no more than 1 day to view the Netherlands. Kinderdijk is also recommended for every Dutch person who still has a day to explore the Netherlands. Because where else would you find so many beautiful historical mills together The United Nations' list of structures such as the Great Wall of China, the Pyramids of Giza and the Acropolis in Athens also includes the Woudagemaal in Lemmer. The old steam pumping station, the largest in the world, still has a function: keep the feet of the Dutch dry! From Texel to Wangerooge 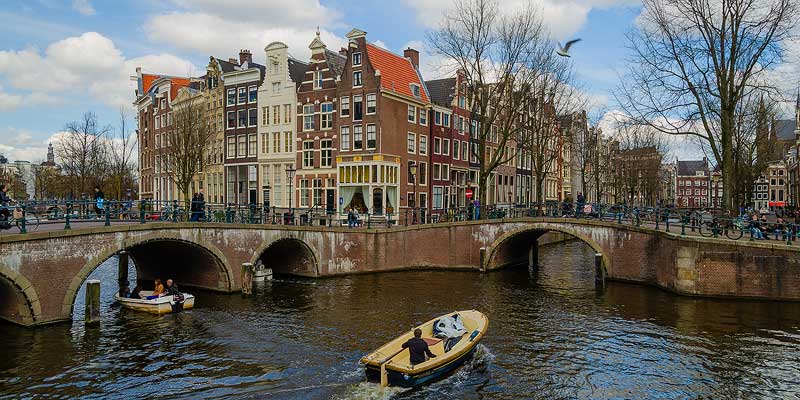 The Canals of Amsterdam

In the summer of 2010, the famous canals of Amsterdam were also added to the list, and rightly so, because where in the world can you find such beautiful canals?

With the design of the Van Nelle factory in Rotterdam, architects Jan Brinkman and Leen van der Vlugt wanted to create light, air and space. The factory, where coffee, tea and tobacco was processed, was way ahead of its time. There were even showers for the employees.
Today, the factory is home to nearly 100 businesses and holds congresses, fairs and parties. According to UNESCO, the factory is an example of Dutch modernism and is therefore the tenth Dutch World Heritage.

World Heritage in the Dutch Caribbean: Willemstad on Curaçao was founded by Dutch merchants in 1634. The city was an important place for the Dutch slave trade at that time. Willemstad is built around a natural harbour. The colourful buildings in the city are a mixture of Dutch, Spanish and Portuguese styles.