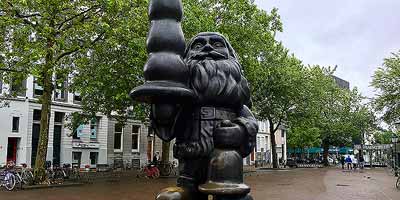 Rotterdam - Have a look and smile. The Santa Claus statue in Rotterdam is a controversial statue. Just have a look and use your imagination to see why this santa has a dirty nickname.

The city of Rotterdam bought the sculpture from Paul McCarthy (the artist, not the ex-Beatles) in 2001. But when the work on the gnome statue was finished, they decided to get rid of it.

Eventually the gnome ended on the Eendrachtsplein in Rotterdam. The artist says that the Santa Claus statue is a stylised Christmas tree; the statue is an indictment against consumption and the sex-oriented society.

In 2014 McCarthy created a similar artwork. A 24 meter tall inflatable tree looked similar to an enormous toy that only certain adults can appreciate.