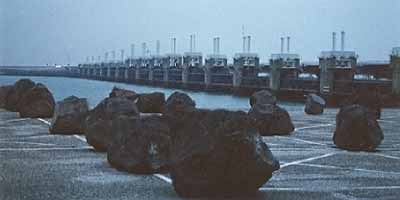 Ouwerkerk - There is a saying "God created the earth, but the Dutch created The Netherlands". One thing is for sure, the Dutch people are proud on their dikes and polders and turning water into land. However, the history of the Dutch and their battle against the sea has a black page: The night of Saturday, January 31st - Sunday, February 1st in 1953.

A fatal combination of spring tide and northwest storm hit the coast of the province of Zeeland. The dikes could not hold the storm and during the night large areas flooded. People and animals drowned in the cold and rough water. Buildings were destroyed.

The Watersnoodmuseum in Ouwerkerk tells the story of the flood.