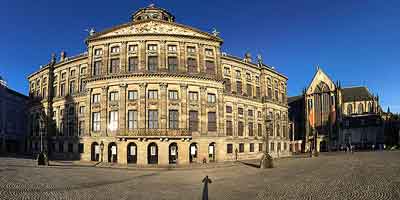 Amsterdam - The Royal Palace at Dam square is one of the palaces of the Dutch Royal Family. The former city hall is being used for official state visits and other occasions such as receptions, award ceremonies and the New Year reception of the King. The palace is also being used during royal weddings, for example in 2002 when Willem-Alexander and Máxima got married.

The building is open to the public if not being used by the Royal Family.
The oldest part of the palace is from 1655.