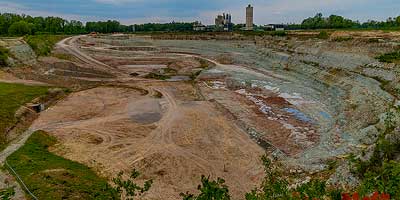 Open-cast mine of un-Dutch proportions

Winterswijk - Winterswijk quarry is an open-cast mine of un-Dutch proportions where lime is extracted on a large scale. This lime originated in the Triassic, 240 million years ago. The quarry is known for fossils, ranging from shells to bone remains and footprints of saurians and different types of minerals.

The Winterswijk quarry covers 27 hectares and consists of three quarries. Quarry I is in-active. Quarry II is owned by the Dutch forrest administration. Lime is only extracted in Quarry III.

Besides limestone and fossils, something else is found in the quarry: Winterswijk gold. Unfortunately it is not really gold that shines here. It is pyrite.

What do visitors say about Winterswijk quarry?

Winterswijk trips in the area

Visit: An average visits takes approx. 0,5 hours.
Although the Triassic was 240 million years ago, it is only relatively recently compared to the four to five billion years of age of our planet. It is nevertheless special that traces from that time can be found here in the quarry. A walk around the quarry is 13 kilometers and takes about 4 hours.

Where to stay Winterswijk?