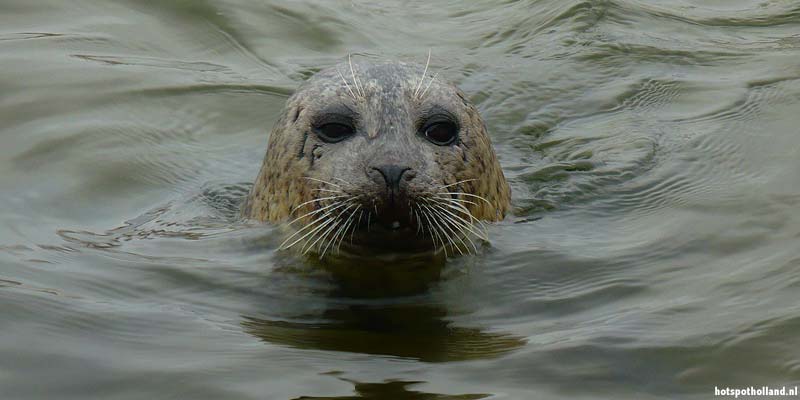 Seal at the Hooge Platen in the Westerschelde

Twice a day there is low tide in the estuary of the Westerschelde. Then an enormous area of 1800 ha of mud flats and sandbanks emerges: the Hooge Platen, not far from Breskens in Zeeuws-Vlaanderen. Thousands of birds settle down to look for fish, shellfish and worms left behind. At high tide, the Hooge Platen disappear again - only the island of De Bol protrudes just above the waves at an average high tide. From two hours before low tide you also have a good chance of seeing seals from the dike.

A group of about 30 seals lives around the Hooge Platen and the Bol nature reserve in the Western Scheldt. This concerns both gray and harbor seals. From the mainland, on the dike near the town of Number One, not far from Breskens, in Zeeuws-Vlaanderen, you have a good chance of seeing the seals when it is low tide.

The Western Scheldt is rich in food for birds. When the tide comes in and the Hooge Platen dry up, the shellfish and the fish left behind are there for the birds to pick up. The island of De Bol remains dry during normal high tides - it is therefore an ideal nesting area for the birds.

What do visitors say about Hooge Platen Westerschelde?

Address: Magereind
Postal code and city: 4513  Hoofdplaat
Province: Zeeland
Additional information: De Hooge Platen and De Bol are only accessible by boat. You can also watch birds and seals from the mainland. From the seawall at the towns of Number Een and Hoofdplaat in Zeeuws-Vlaanderen, you have a beautiful view of the Hooge Platen and the Bol. At the village of Number One, usually near Buoy VH8, you can often see the group of seals on the shelf from 2 hours before low tide.
The area is closed during the breeding season.