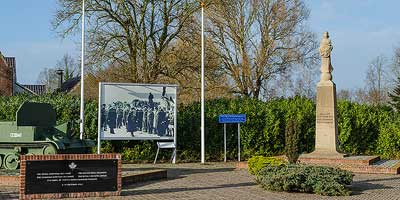 The first step on Dutch territory during WOII

Eede - It is a minute to half past one in the afternoon, Tuesday, March 13, 1945. The end of World War II in the Netherlands is getting closer and some parts of our country, such as Zeeland, have already been liberated from the German occupying forces. This is a special moment at the end of the war.

Queen Wilhelmina back on Dutch soil

It is a special moment when Queen Wilhelmina returns from exile and sets foot on Dutch soil for the first time since 1940. It happens in Eede, a tiny village on the Dutch/Belgian border in Zeeland/Flanders. Heavy fighting took place in this part of the Netherlands between the German and Canadian military forces at the end of the war. In the absence of a clear boundary line, and lack of paint to mark the boundary, fresh flour was tapped from a nearby mill to indicate the boundary line.
A monument has been set up on the Wilhelminaplein in Eede in memory of this special moment at the end of the war.

Eede trips in the area

Where to stay Eede?