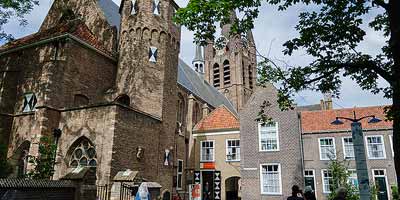 Het Prinsenhof in the historical city center of Delft

William of Orange murdered in Delft

Delft - Het Prinsenhof is located in the historical city Delft. The museum tells the story of Willem van Oranje (William of Orange), the founder of The Netherlands and the 'Father of the fatherland'. Van Oranje used to live in the "Het Prinsenhof" in Delft until he was murdered in 1584.

The bullet holes from the attack

In the Prinsenhof building you still can see the crimescene. There are bulletholes of the attack in the wall near the stairs. The museum also tells the story of Delft during the Dutch Golden Age.

What do visitors say about Museum Prinsenhof Delft?

Delft trips in the area

Visit: An average visits takes approx. 2 hours.
Walking from the train station to the museum takes approximately 10 minutes.
Please contact your destination for pricing and availability.

Where to stay Delft?