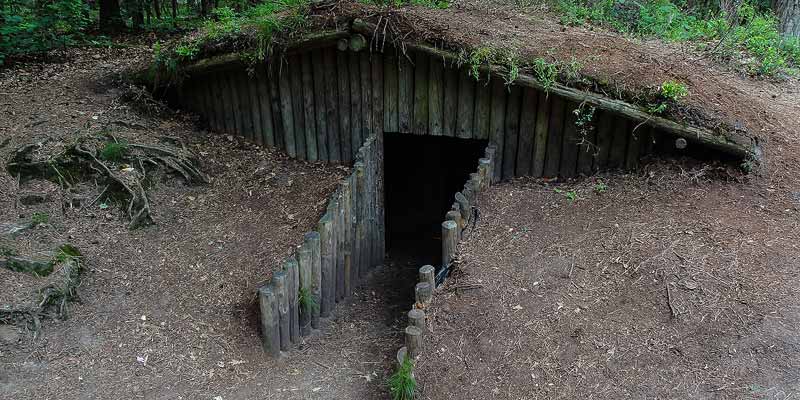 Secret shelter for persons in hiding

Vierhouten - During the Second World War, more than eighty people in hiding hid in the Soerelse forrest. The place offered refuge to more than 80 people, including British airman and Jews. To keep their accommodation secret, the refugees had built nine well-camouflaged and partly underground huts. The Hidden Village, near the town of Vierhouten on the Veluwe, was founded in the spring of 1943 and was in use until the fatal Sunday in October 1944.

"Actually we have experienced the war twice", the two older hikers say at one of the huts. The war is indelibly etched in their memories. They come from the village of Rhenen and - just like us - are curious about the secret village. "At the beginning of the war, there was heavy fighting in our area and much broke. At the end of the war, another heavy battle was fought in our area." The woman's parental home has been bombed. "But luckily I am still alive", laughs the vital woman.

The original Hidden Village no longer exists. However, three recreated huts can be visited and give an idea of ​​how the huts looked like. And how oppressive it must have been to live here with so many people.
You also get a picture of the camouflage. Apart from the entrance, the huts are completely immersed in the forest. At the time, all walkways were carefully planted and the forest was much denser.

On a Sunday in October 1944, the Hidden Village is accidentally discovered by two German SS soldiers who are hunting in the forest. They see a child crossing a fire path in the forest and discover the camp. Most residents of the village manage to escape, but a number of people in hiding are caught on their flight and shot. A monument on the Tongerenseweg (the road between the Hidden Village and the town of Vierhouten) is a reminder of this occasion.

The residents of Het Verscholen Dorp were provided with food by residents from the region. That was very dangerous, because you could be executed. For water, a pump had been built inside the camp.