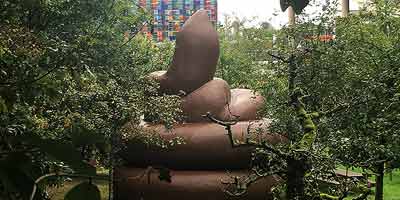 The Turd by the artist Wim T. Schippers

Hilversum - Dog poo is one of our biggest annoyances on the street. But the artist and tv-producer Wim T. Schippers has a different opinion. According to him you should also look at the beauty of humble things... The result? A four meter tall turd.

"Stationnement Gênant" (annoyingly parked), better known as "the turd" was initially created for an outdoor exhibition. The turd was purchased in 2011 by the VPRO broadcast €60,000 in honor of their 85th anniversary.

What do visitors say about Stationnement Gênant?

Hilversum trips in the area

Visit: An average visits takes approx. 0,1 hours.
The Turd can be found in the garden of the VPRO broadcasting building at the Media Park in Hilversum. Unfortunately the garden is not open to the public. Can´t wait for an open day? Along the VPRO building runs a small footpath ("Ht Dievenpaadje"). Through the gate you can see the 4 meter tall turd in the garden.

Where to stay Hilversum?