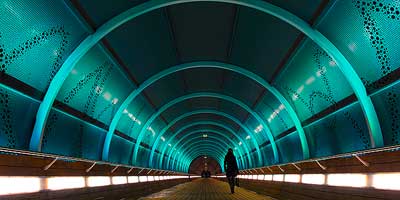 An overview of the funniest nicknames of buildings and other structures in The Netherlands. We give you the Top 10 of known and unknown nicknames special, spectacular and sometimes bizarre buildings on Dutch soil. The Bra Bridge in Amsterdam IJburg

#1 There are more than 40,000 bridges in the Netherlands. Most of them are made of concrete and look pretty boring. But fortunately not all bridges are straight and angled! Due to its round curves the 23o meter long 'Enneus Heermabrug' bridge in Amsterdam has been nicknamed to the Bra Bridge.
Dunny detail is that architect Nicholas Grimshaw had something completely different in mind with the smooth lines: a reptile from the time that the IJsselmeer lake was still a primordial sea.
Location: Amsterdam (road to IJburg)
Amsterdam + Changing colors at Mediapark in Hilversum

#2 Back in the days, before flat screens existed, television sets used to have a large cathode ray tube. The nickname in dutch for this old type of TV is "Kijkbuis".
The city of Hilversum is the heart of the broadcasting industry in the Netherlands. The main studios are all located at Mediapark. A fancy bridge with changing colors nearby, was therefore nicknamed to Cathode ray tube (De Kijkbuis).
Location: Train station Hilversum Mediapark
Hilversum Sound and Vision + The Poenschoen Shoe in Amsterdam

#3 De Poenschoen (The shoe) is located in the Zuid-as financial district of Amsterdam. In Dutch, the building is called "Poenshoe", which means a shoe full of money, referring to the type of companies located here.
Location: Amstelveenseweg 500, 1081 KL Amsterdam
Amsterdam + The monkeyrock in the city of Groningen

#4 Monkeyrock is a popular nickname for buildings with an organic shape. This sandcastle in Groningen is the headquarter of the Gasunie and is a typical example of what the dutch call a monkeyrock.
Location: Concourslaan 17, 9727 KC Groningen
Groningen + The UFO in Almere

#4 When entering Almere from highway A6, you may see a vast UFO. However, don't expect aliens, only fashionista's and business men can be spotted here. The donut shaped building is also something referred to as The Mushroom or The Donut.
Location: Veluwezoom, Almere. Near highway A6 Space is limited in cities. You can go up, building a skyscraper, or you go down and build something underground. As Holland is famous for its canals, Rotterdam built a shopping street in some sort of canal; the Shoppers Canal! Location: Rotterdam city centre
Rotterdam + #7 Waiting for the train at Utrecht Central Station? From the platform, look up towards the back of the station. Do you recognise The Torch (De Toorts)?
Visit the city of Utrecht + #8 Back in the days, coal was the main source of energy to cook and for heating houses in winter. This church appears to have similarities with a coal kit, some sort of bucket to store coals. These days, hardly anyone knows how such coal kit looks like, but the nickname coal kit (kolenkit), remained.
This area in Amsterdam is also called the coal kit area (De Kolenkitbuurt) and was built shortly after World War II.
Location: Bos en Lommerweg, Amsterdam The Swan /Erasmus bridge in Rotterdam

Rotterdam is the nickname capitol of the Netherlands. As soon as a new building appears is built, it quickly will get a funny nickname from its citizens. The Erasmus bridge is a landmark in the city centre. In the meantime, it's nickname The Swan is so widely used that every one is using that instead of her real name.
Location: The Swan bridge connects the city centre with the new popular hotspot called Kop van Zuid

Sometimes a nickname is obvious. For this building at The Uithof in Utrecht only one nickname is possible: the test image.
Location: >Hogeschool Utrecht at the De Uithof area in Utrecht What do visitors say about Nicknames of Dutch buildings?