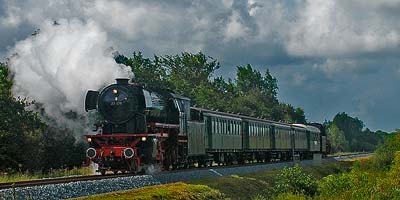 From Veendam to Stadskanaal and Musselkanaal

Stadskanaal - On the border between the provinces of Groningen and Drenthe, the "Semslinie", the STAR museum railway line crosses the former peat colonies. The 26 kilometer long railway runs from Stadskanaal to Musselkanaal and during the ride in this antique train you travel back to the time of the peat workers and the time when the train was something completely new.

The railway was still in service with the Dutch Railways until 1994. The Stadskanaal Rail Foundation has been operating a historic steam train on this line since 1994.

During the open days in September, runners compete against a steam locomotive: Race the train! If you are a runner, give this unique challenge a try. It's cool!

Stadskanaal trips in the area

Where to stay Stadskanaal?